Harold Oakhill sent a freight car update recently. He models the Ulster & Delaware Railroad in 1924, just before it was absorbed into the New York Central. Here are Harold’s latest freight car additions.

Dennis sold the masters and the kits were marketed under the name Des Plaines Valley Car & Foundry for a while. I picked up one of these kits around 1990. In 2013 I purchased another kit, plus a box of sides and ends for nine more cars and assorted parts from Cyril Durrenberger. Most of these sides and ends had bubble holes, but there were enough good castings and other parts to cobble together two more cars. I did have to scratch build a roof, two floors, and a few underframe struts. I originally bought the extra parts for the cast Murphy ends so I could build some steel frame shorties from MDC boxcar shells. Most of those ends are good. 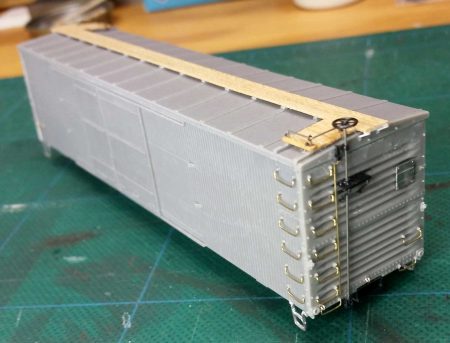 This early resin kit was an interesting mix of mediums; resin, wood, wire, cast metal, styrene, and ABS plastic. Cyanoacrylate cement (CA) holds most of the parts together. I used canopy cement to install the wood roof walks.

The lettering was cobbled together NYC 36-foot box car decals created by Dave Campbell and sold through Resin Car Works. And yes, I changed some of those tiny little numbers to show the correct dimensional data for a 40-foot car! Several prototype photos were used for guidance. The decals were printed by Rail Graphics and are an absolute joy to work with. I painted the cars with PollyScale Boxcar Red and weathered them with an airbrush and PanPastels. Each car has a slightly different level of weathering.

I started this project n March 2016, just a few weeks after Cyril Durrenberger passed away. I knew his name as he was a frequent contributor to the Early Rail YahooGroup and I enjoyed reading his posts. However, I had forgotten who I had purchased this stuff from, so it was a bit weird to see Cyril’s name on a receipt that fell out of the kit I had purchased from him when I began the build. He had purchased it directly from Dennis Storzek in 1986 and now here I was finally constructing it 30 years later. It got me to musing about how our stuff continues to exist long after we are gone. I have helped two widows liquidate their husbands’ model railroad collections over the years. I have given my wife the names of modelers who she can turn to for assistance to move my models along when that day comes. Our stuff just keeps getting passed around. We finish each other’s projects…

Thank you, Harold, for sharing your work on these vintage resin freight car kits.