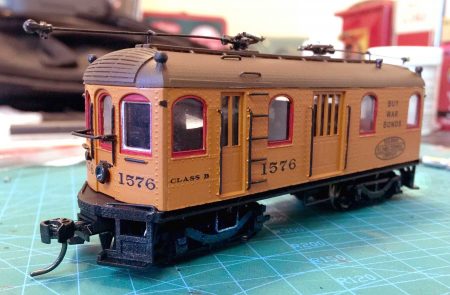 AJ Chier sent a few images of his HO scale Illinois Terminal Class B motor. Here’s AJ with some details on this fine model.

I have been a traction fan, both 1:1 and modeling, since my first trip to the Orange Empire Railway Museum in Perris, California, in the early 1990s. Two years ago I was drawn back into the hobby, after a decade-long break, by the allure of DCC control and the advent of 3D printing. I learned a basic free web-based 3D design program called “TinkerCad” and began to design model kits.

An Illinois Terminal (IT) fan approached me and asked if I would modify a copy of the design to match the very similar IT 470-473 class. In this process, I became fascinated by the unusual and, to be rather blunt, endearingly homely equipment unique to the IT system. The product line of West Coast Traction Supply now includes several IT model kits, including the 470 class, an IT combine, and now our latest, two versions of the Class B freight motor.

There are two variants of the Class B kit. One is designed around the economical six-foot wheelbase Bowser traction mechanism. The other is designed to accept a pair of prototypically-correct seven-foot wheelbase North West Short Line Stanton powered trucks.

The Class B kit design details are almost entirely based on motor 1565, which is preserved at the Illinois Railway Museum. It should be noted that each piece of IT equipment, including each of the Class B motors, seem to have been one-off with regard to details, with the greatest variations in the Class Bs found in the anti-climbers and roofs. Some detail adjustments may be required to match a particular motor.

The 18 Decatur-built prototype motors were 1910 products, numbered 1561 to 1578, and originally lettered for the Illinois Traction System. Here are more prototype images of IT 1565 preserved at the Illinois Railway Museum in Union, IL. 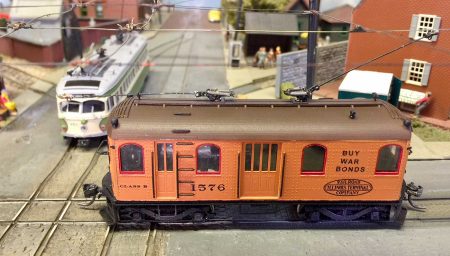 The model is available for sale in kit form on Shapeways in HO and O scales under the West Coast Traction Supply vendor name. The model does not include the drive components but they are sold through several retailers, including CustomTraxx.

The HO Bowser-powered model is featured in these photos, which were taken on the Southern California Traction Club’s modular layout. The club is based in Los Angeles and has three modular layouts; a superb HO scale mid-20th-century-based traditional traction layout, a modern HO scale light rail layout, and their newest, an N scale traction layout. The club sets up the layout at most of the region’s model railroad shows, and meets nearly every weekend for work sessions. The club’s Facebook page has photos and details. You do not need to be on Facebook to view the page content. 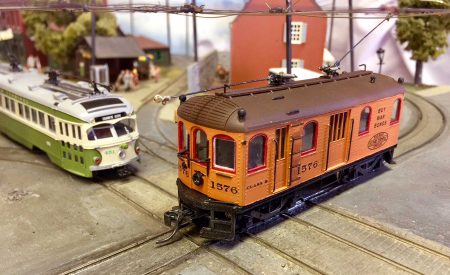 Resin Car Works decals were used to complete the model. At this writing, the black lettering sets are currently unavailable. Sets are offered the in “Dulux” gold and in white for two additional prototypical paint schemes.

Thank you AJ for sharing your work on a unique prototype! Resin Car Works honcho Frank Hodina is also an IT fan. Here’s his version of a Class B motor. 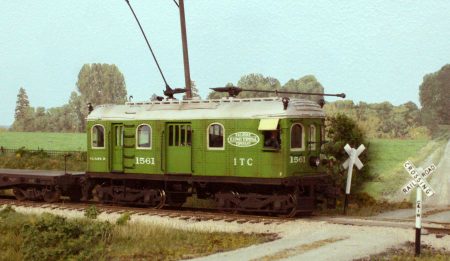 Frank used two NWSL Stanton drives with an axle spacing of 7-foot, 6-inches in order to use a Stanton drive with a larger motor. The overall wheel base is the same but the trucks are a bit closer together. The model was based on #1565 at the Illinois Railway Museum. Frank was surprised to find the bell was mounted on a bracket under the floor.