Summer is winding down but the Railroad Prototype Modeler (RPM) season is heating up! There are seven RPM events in the upcoming months, plus Prototype Rails kicks off 2019. Let’s review the upcoming events.

The Coalfields RPM that was set for Roanoke this fall has been cancelled.

Check the RPM Event Calendar for details and links to make your plans. Pack some models to display. They can be completed or in-process. I’m hoping to attend at least one more event this year. Maybe I’ll see you there!

RPM Chicagoland is celebrating a 25th anniversary this fall. It was founded by Martin Lofton and considered to be one of the first RPM events. Mike Skibbe is leading the charge now and is ready to announce the 2019 mini-kit attendees.

This year a FGEX truss rod reefer will be the gift. A fine reference article on these cars can be found in Speedwitch Media’s “Prototype Railroad Modeling – Volume Two”. In HO scale, an Accurail reefer body and a Tichy underframe are the core parts. Resin cast prototype details are installed to reflect prototype practice. Chief RCW minion Frank Hodina has the “concept” model just about ready for the paint booth. The side grabs and ladders haven’t been installed yet so the car body is easier to paint

As this is the “concept” model, some styrene parts were used. Resin parts will be issued in the final version. 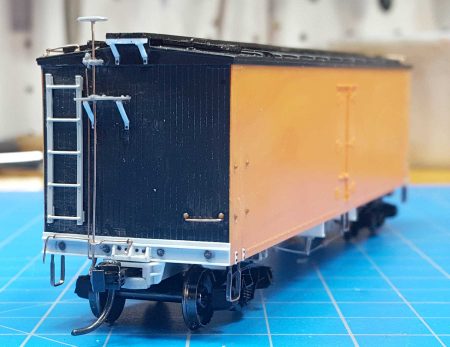 The combined Fruit Growers Express, Western Fruit Express and Burlington Refrigerator Express fleets of 1948 totaled 4,066 truss rod cars in service. This was 21.12% of the 20,213 car total for these three companies. Some cars had angled queenposts and some had short, straight queenposts similar to the parts for this model. This mini-kit for RPM Chicagoland attendees will enable an easy conversion of the Accurail body to reflect another prototype.

Mike Skibbe hopes to have similar mini-kits available in other scales for RPM Chicagoland attendees.