Just before Christmas, discussion on the Steam Era Freight Cars YahooGroup was focused on box car roof paint failure. Many felt the overall effect was interesting, but far less common in the steam era due to more accumulation of soot on freight cars. Nonetheless, paint does fail, most noticeably on galvanized metal roofs. The above image is a portion of a 1943 Jack Delano photograph of the Milwaukee Railroad freight house in Galewood, IL. Of the nine box cars in the edited image, three of the roofs show signs of paint failure. The most apparent example can be seen on a car in the second row and second from the left. The two cars in the front row on the right side also show some paint failure.

We invited modelers to share images and techniques to inspire others to add this detail to a few of their freight cars.

Bill Welch built this Great Northern box car nearly 20 years ago and used a product called “Mask It” to try for the peeling paint look. He says he liked it at the time but in retrospect the peeling paint looks too contrived or planned, and looking a bit too much like “Bird Poo.” Not exactly the look he wanted for this model. Additionally, the model represents a car with two years of service, so there is probably too much peeling paint for that short time period. Bill plans to touch this up with PanPastel Burnt Sienna and Dark Gray to will help calm it down.

Michael Gross sent along his image of an InterMountain AT&SF Sk-T stock car reflecting a 1954 appearance. He airbrushed the roof with acrylics to reflect soot and dirt typical of the late steam era. The galvanized patches are a mix of black and white tube gouache applied with a fine brush. When dry, the roof was again airbrushed with a sooty acrylic mist to tone down the patches and tie everything together. 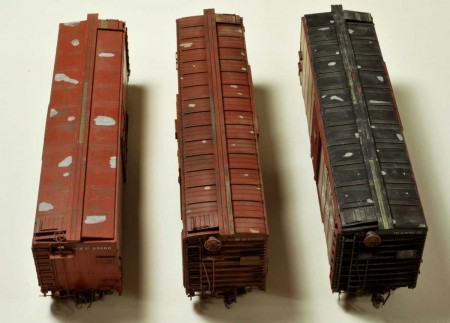 Eric Hansmann built and weathered these cars before his modeling focus shifted to an earlier era. He kept the process simple by using a micro brush with a small amount of Tamiya Sky Grey paint and rolling it onto the model roof to create a peeled paint effect. An additional weathering wash and years of accumulated dust have muted the peeling paint color and boundaries. 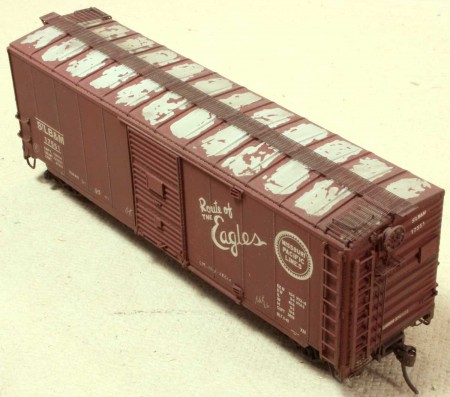 Frank Hodina sent in this model image. The car is an InterMountain 10-foot, 6-inch interior height box car modified with a Sunshine mini-kit that was the 2005 Naperville gift. The kit roof was replaced with one from Red Caboose and the running board is an etched metal detail part from Plano Models.

Frank used rubber cement to create a peeling paint effect. A galvanized color of 50/50 Floquil Old Silver and White is sprayed onto the roof as a base color. Once dry, dab on small amounts of rubber cement then paint the car color over the roof. When all is dry, carefully peel the rubber cement off of the roof using sticky masking tape.

Scaling down subtleties is not as easy as it seems. At least two of the four modelers who featured models here feel they can do a better job with peeling paint effects on future attempts. Bill Welch has been working on a few techniques that may be featured on the RCW blog.

Thanks to Michael Gross for submitting photos and a description of his stock car model. Questions and comments can be posted below. Please follow the instructions so your comment can be posted. All comments are reviewed and approved before they appear.