Eric Mumper joins the RCW bloggers with an upgrade on an HO scale brass covered hopper.

The Owens-Illinois Duraglas covered hopper cars have been a bit of a fascination of mine for many years. My layout has the Streator, Illinois, bottle plant as an industry and Chet French found many of these cars coming in on the Wabash hauling soda. Where they were loaded would be great to find out. 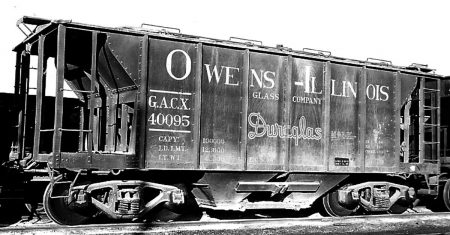 This Resin Car Works decal set can also be applied to a 1321 cubic capacity covered hopper model. Funaro & Camerlengo kit #7090 or 7091 are good starting points for these prototypes. Some alterations may need to be done as the models are built. I had the brass model in hand that was a match.

After a thorough wash, the car was painted with my favorite black: Polyscale Steam Power Black. Future Floor Wax was used to create a glossy decaling surface. The Resin Car Works LO-GACX1321 decal set is laid out to minimize the amount of cutting needed to decal the car although the ribs still require some cutting and fitting. The large Owens-Illinois was cut from the sheet with a straight edge and separated into each of the major rib sections. By using a straight edge, the cuts can be made square to the letters. This allows the decal film to be used as a means of keeping the lettering standing straight and in proper alignment across the car.

The “O” was placed first, followed by the “OIS”. Once the “O” is cut out, it becomes difficult to tell top from bottom. A notch cut out of the top corner will keep the alignment correct and still allow a straight edge to place the letters in the middle.

The “Duraglas” decal becomes the most challenging as it lays across the center rib and needs the red applied separately from the white. The decal was created with extra extensions on either side of the middle “a” to allow it to drape across the rib. The technique used here was to cut the white portion into three pieces with the cuts on either side of the “a”. The “Dura” was applied first making sure the edge of the “a” was snuggled up against the rib keeping the “D” off of the rivet strip. The “aglas” was then applied in the same manner. Once those decals were dry, the “a” was placed on the rib and when everything lined up, a very tiny amount of Solvaset was applied to make the “a” drape over the rib. Gentle nudging can make sure the draped portion lines up with the previously applied decals if needed. The red portion of the decal was applied in the same manner keeping in mind that the eye is very sensitive to not being perfectly centered in the white. The “D” is off a minute fraction and it does show a bit. The chalk marks are randomly applied Sunshine decals.

Weathering followed a coat of flat finish. For some reason the camera does not show the weathering although my cars are not made too grungy since they are meant to operate and seeing the numbers is a good thing. Pan Pastels were used followed by light coats of really thinned mud. The trucks were attached to a stick and weathered separately. After final reassembly this car is ready to go into service like its prototype.

Thanks to, Eric Mumper for sharing his work on a brass model that reflects a prototype for his layout. Questions and comments can be posted below. Please follow the instructions so your comment can be posted. All comments are reviewed and approved before they appear. To subscribe to this blog, enter your info for a comment and check the last box to notify of new posts by email. Share the blog link with other model railroaders.