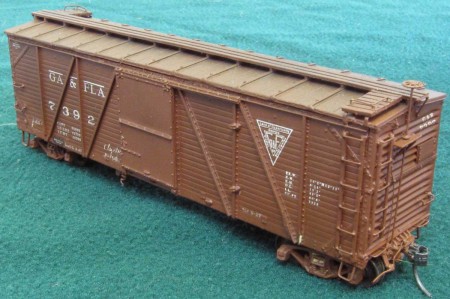 Al Brown steps in to show us his work on a Georgia & Florida box car.

Georgia & Florida box car, number 7392, is Sunshine Models kit 39.18 with some details added in the construction process. In some cases, I didn’t have the right parts, so these were scratchbuilt. 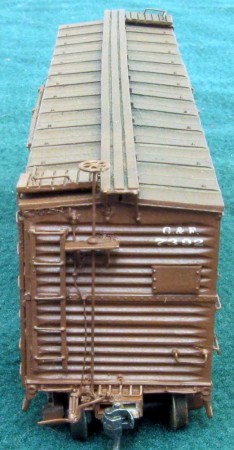 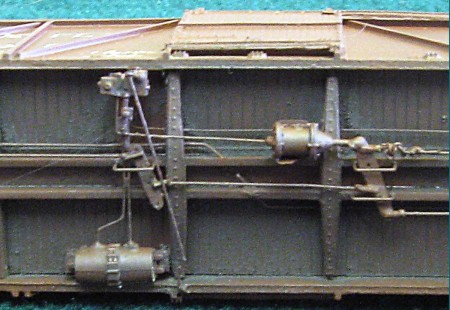 I used a set of Cal-Scale castings for the AB brake system component, but don’t remember why. Fine wire was installed to model the retainer release rods. I often pick up a few extra commercial parts when they are needed. Over time I’ve amassed a stash but they have been helpful in completing other projects. 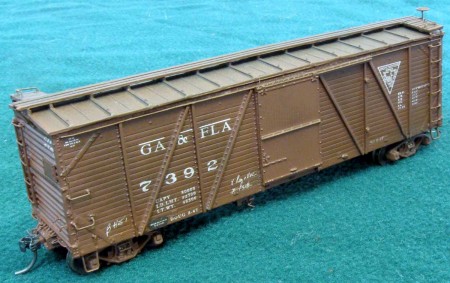 Tichy brake wheel and brake-step mounts were used to detail the B end of the car. The 1:1 cut lever is very strange and seems to work on the same principle as the Carmer hardware. But these parts don’t quite look exactly alike, nor is the mount the same. I jerry-rigged things to look more or less like the prototypes. I wanted to use a Free State Systems etched-metal Carmer cut lever because it’s more durable than anything I could make. The cut-lever mounting brackets are Hi-Tech air hose brackets. The Free State Systems etched parts were mounted backward to fit.

Scalecoat II Box Car Red paint was used to finish the model after construction. The decals came with the kit and weathering was done using Bragdon powders.

Thanks to Al Brown for sharing his work on a Sunshine Models resin kit. Questions and comments can be posted below. Please follow the instructions so your comment can be posted. All comments are reviewed and approved before they appear. To subscribe to this blog, enter your info for a comment and check the last box to notify of new posts by email.