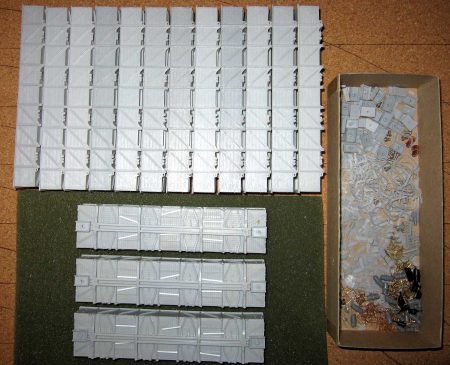 Although a black background was standard for the herald on the as built cars, those repainted after 1940 only sporadically had them. Additionally, the lines above and below the reporting marks and car numbers were part of the original markings on the cars but were rarely reapplied during repainting.

Although changes were made to the cars over their lives, including replacing the wood ends with steel ends and, sometimes, the wood sides with steel sides from surplus box car ends, many of the cars retained their wood sides and ends through retirement. Certain GS-5 and -7 class cars also had their lever hand brakes and/or towing loops replaced with power hand brakes and/or steel plate towing eyes during the 1940s. A number of the cars were renumbered into company service in later years.

A special thanks to Jerry Hamsmith for supplying the prototype details and image. Jerry also added the following model kit info. To clarify the origin of this kit, the patterns were first made by Frank Hodina for the Sunshine flat kits that were offered. After Martin Lofton’s death, and with Frank’s permission, parts from the flat kit were assembled by Ed Rethwisch to create one-piece body kits. The first of these was a wood car (composite wood sides and ends) that had cast on grabs. The second was the car in question, one that has composite wood sides and replacement steel ends (and no cast on grabs). The wood end car is no longer being produced, although we plan to offer it again without the cast on grabs.

If anyone is interested in these kits, we are selling them. They come with various detail parts, an instruction sheet, and decals but no trucks or couplers. Check out our PDF list of current kits and decals. 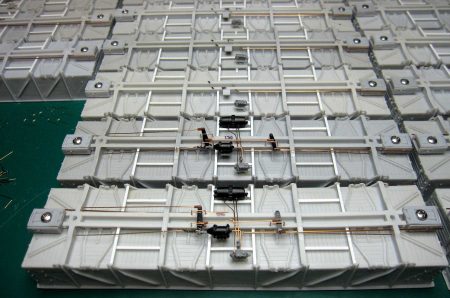 The CB&Q used drop bottom gondolas extensively for coal hauling, among other things, so I need a sizable fleet. I bought seven Sunshine Models flat kits shortly before Martin Lofton passed away, five GS-5/7/8 kits and two GS-1/2 kits. I cleaned up all the parts awhile back and they have been sitting in a box for almost four years, waiting on inspiration to build. Meanwhile, Ed and Jerry came out with the one piece kit body, which obviated many itty bitty pieces. I decided to build the newer kits first then go back to the Sunshine kits at some point.

The batch build is progressing nicely. I completed the build for two GS-8s as I made patterns and jigs for the rods and piping along the way. Fifteen cars require a lot of grab irons, brake rods and piping. 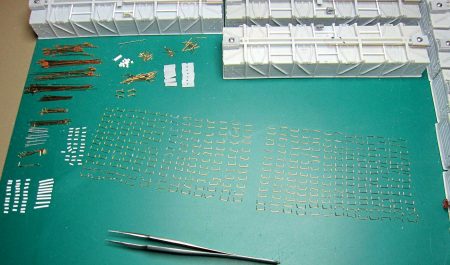 The above picture shows the trimmed grab irons for 13 of the 15 Q gondolas in the batch build. Because the car sides are thin, I made a jig from a scrap of 0.060-inch styrene so the grab iron legs can be cut to 0.060-inch length. I use a 0.040-inch strip of styrene as a stand-off while gluing the grabs. The group on the right is for the ends, and the group on the left is for the sides. The white styrene bits at the bottom are cut with a chopper to build cut lever brackets for the GS-8 cars that need bottom mounted cut levers. The white bits of styrene at the top are the mounting blocks for the fixed brake lever. 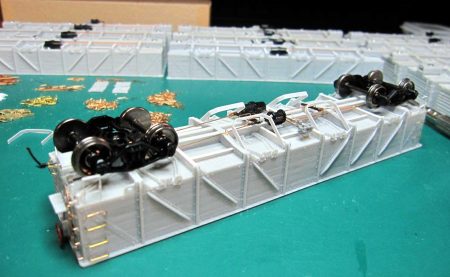 I finished the build on the first two GS-8 gondolas with the addition of uncoupling levers and drop door brackets. I made a spacer to ensure that all of the drop door brackets were installed at the same angle. Also, I made two changes to the instructions that I believe improved the build. The first one was to substitute 0.020-inch styrene for 0.030-inch styrene for the sill step braces, and the other change was to drill the uncoupling lever eyebolt holes after the uncoupling lever brackets were installed. I added the following detail parts that were not included in the kit. Some were improved versions of parts included in the kit.

All of the GS-5 and GS-7 cars had Precision lever hand brakes as original equipment, while the GS-8 cars had Ajax power hand brakes.

The 0.010 x 0.020-inch styrene braces for the sill steps were cut long, and trimmed after installation using a double edge razor blade.

For the GS-8 cars, the Tichy molded chain and clevis were cut to length so that the joint was behind the brake step. A #52 bit was used to drill a hole in the bottom of the Ajax hand brake housing to receive the brake chain. A few of the grab irons will be straightened before painting. Now that I’ve been through the process twice, the rest of the builds should move quickly.

I drilled the hole in the coupler box lid before test fitting the uncoupling lever, and I had to drill another hole when I discovered that the lever didn’t reach the center hole. I’ll fill the unwanted hole with body putty before painting.

After studying prototype photographs of Ajax hand brake housings in several volumes of Focus on Freight cars from Speedwitch Media, I discovered that the brake rod chain should be offset slightly to the right side of the housing. Few modelers and no manufacturers observe that practice. I’ll pay attention to that detail on the remaining seven GS-8 builds.

This car faithfully captures the prototype charm, and I’m looking forward to running a string of painted and weathered cars with coal loads.

At present, I’ve completed the build on three GS-5 and three GS-7 cars, and I’m in the final stages of building the last seven GS-8 cars. The only remaining steps are to add the drop door brackets and relief valve rods.

Thanks for sharing your work on batch building these unique coal gondolas, Nelson. We look forward to your next projects!