I model the mid-1920s and have benefited from recent Accurail models of the Fowler boxcar and the 36-foot double-sheathed boxcars. Several have been added to my fleet with detail upgrades but some of the Fowler models need a metal roof to reflect the prototypes. I thought I’d build a few Murphy XLA roofs for the models. 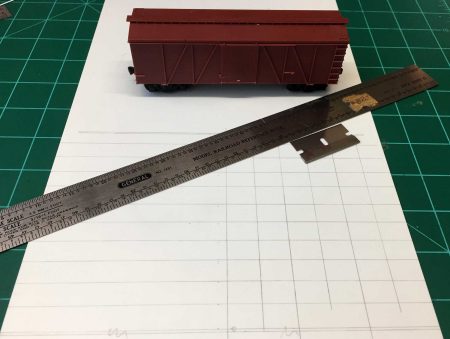 I set out to build a metal roof using 0.020-inch sheet styrene. I drew parameters for three roofs side-by-side on the styrene then marked the seam cap locations. This portion was cut from the larger styrene sheet. Scale 1×4 strip styrene was glued into place on each seam cap location and across all three roofs. 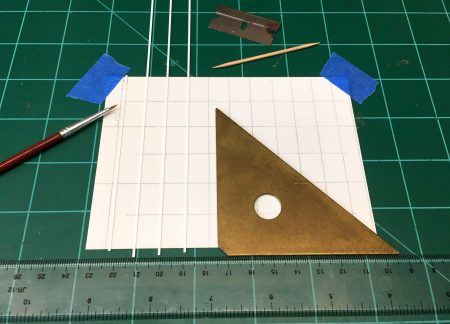 One roof was cut from the work sheet. A couple of scores with the razor blade down the middle of the roof enabled to part to bend at the score but not break. This was placed onto a Fowler carbody to check the fit. 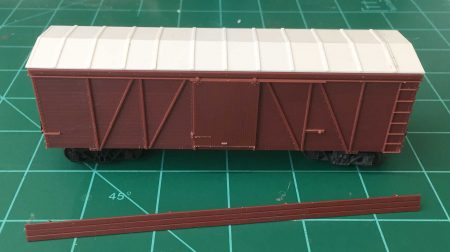 At this point I was excited about the results. Several prototype images were reviewed in order to check on additional details. Unfortunately, I found very few Fowler design cars with a Murphy roof. 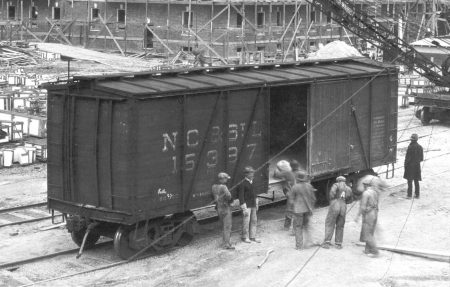 Many seemed to have a Hutchins roof with different seam caps and an intermediate rib in the roof panel between seam caps. I had two roofs on one styrene sheet with the seam caps installed so these were modified to become Hutchins roofs.

A scribe was made at the midpoint between each of the seam caps across both roofs. This was widened slightly for 0.5-mm styrene rod to sit in the roof surface. Once these scribes were wide enough, the styrene rod was glued into place. The Hutchins seam caps are slightly taller and seem to have a narrow cap. 2×2 styrene was carefully centered and glued on each of the seam caps to represent the Hutchins look. Once all was dry, the roofs were separated.

The project is on hold for now as it seems prototype roofs differed in the number of seam caps. My roof models have eleven seam caps. In prototype images where a steel roof can be seen, seam cap counts have totaled ten, eleven, or twelve. While this is a bit frustrating, I have found the process of scratchbuilding these roofs to be easier than expected. These techniques can also be used to create a new roof for 40- and 50-foot cars.