Like many of us, I am often attracted to some neat prototype that happened to catch my eye. It’s the “shiny new toy” syndrome, maybe, but let’s call it “Frank’s Distractions.” I’ll present some of those on occasion here on the blog. Some of these may end up as resin models but many will remain the shiny distractions they are.

Here’s a tank car that caught my interest. Click on any image here to review a larger size.

I found this car from a link posted on the Steam Era Freight Car YahooGroup. The tank car is what I’m calling a GATX Type 22, 10,000 gallon car. This car has a new full platform but they left the support for the old platform on the bands. The existing running boards are still wood while the new platform has an open grate. While it’s not very clear in the photo, it seems the car was reweighed in 1949. 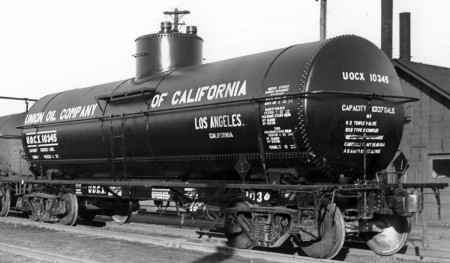 UOCX 10345 is a photo of a new car that was built 8-22. This photo came from Richard Hendrickson. Richard and I had several conversations on what to call these earlier GATX tank cars. The earliest we’ve seen the TYPE designation on a GATX tank car is on UOCX 10484. We figured that working the GATX system backwards was logical. The first year that underframe design was built determined what TYPE it was. Check out the great info in this 1925 Railway Review article, “Improved Design of ARA Class IV Tank Car.”

The GATX Type 22 tank cars would be a “Someday” kit. There are just too many other items ahead of it right now. The model pictured above is a kitbash of an InterMountain tank. The only resin parts are the tank saddles and the running board/brake supports. If this GATX Type 22 goes into production, it will need to be a full resin kit due to the unavailability of InterMountain kits. The car is modeled from plans and measurements from a prototype car at the Monticello Railroad Museum. It’s GATX 7297 which was built 12-25.

I hope you have enjoyed this shiny new toy! It’s just one of many personal distractions.